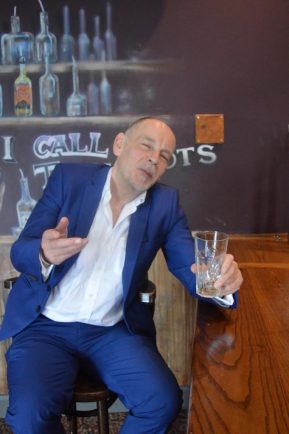 THE PRINCE of Wales in Moseley is opening its doors to theatre on a regular basis now and also offering up a mix of performance spaces from within its quirky interior.

Last time I was here was to see the imaginative Scottish football saga 1902, which is now on its way to wow the fringe in London. For this The POW roofed over the garden and created quite a huge acting space by pub theatre standards.

This time, for ‘I Call The Shots’, it all happens in a much more intimate tinselight bedecked cozy room – where a packed house settled in for a unique night of theatre.

For him there was no cowering in the dressing room trying not to throw up and counting down the seconds to the curtain – he’s outside the auditorium door greeting everyone like a happy-clappy padre on a bright Sunday morning.

Once we are seated, Venables bursts in, greeting us all again – not as himself now, but as some strange ageing Scottish gangster who proceeds to set the scene like a television commentator does on Cheltenham Gold Cup Day.

Then quick as a flash we’re off at a breakneck pace on a tale of mayhem, mischief and mirth.

This doesn’t let up, falter or fluster for the next 60 minutes – which pass at the speed of an episode of Kiefer Sutherland’s ‘Twenty-Four’ if you were a fan.

The hero is a drama teacher who has tried to distance himself from his criminal parents but a bit like those old Western movies, try as he might, the baddies keep coming back to haunt him.

There is nothing to do but to don the inevitable tin star and build this one-man epic to a ‘Gunfight at the OK Corral ‘ finale.

Along the way there is comedy, drama, pathos; many lines that are praiseworthy.

This is of course is work in progress and a tweak or two is needed here and there to replace the obvious with the unexpected.

Venables is a unique talent – he is neither a stand-up-comedian nor a public speaker but without doubt he could be either if he wished.

No, what he is, is a storyteller; like one of those from the ‘days of old’, who moved from village to village, enthralling the locals with their tales.

As we emerge from the Covid lockdowns it’s fitting really that we should have a post apocalyptical performer like Venable ‘Calling the Shots’.

Watch out for new dates for the Venables’ one-man shows and grab yourself a brilliant night out in Mike’s company.