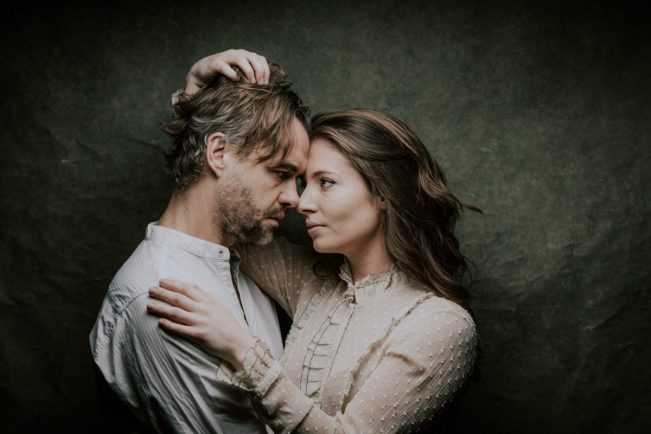 THE GOLDEN rule of adapting any classic novel for the stage is that it must present what the writer intended their audience to see and feel in a comprehensible way. In essence- achieve good story telling.

Tilted Wig are a new theatre company to me, but one I shall certainly be watching out for in the future.

It was 60 years ago that the famous literary trial at the Old Bailey allowed publication of the said banned book, which was supposed to poison the minds of polite folk and servants alike turning us into degenerates. In fact, the verdict not only led to long queues outside bookshops but changed history by heralding in the swinging 60s and with its monumental changes to sexuality. Lady Chatterley and her pheasant-rearing lover pioneered sex as something to be enjoyed – not endured – by both or more participants.

In this Tilted Wig production adaptor and director Ciaran McConville has worked in close harmony with his designer Katie Lias to bring together a tale of life after the Great War – the changing British class structure and sex going on behind drawn curtains and closed doors – all wrapped up in one big smacker of a love story.

The curtain rises on a noisy battle in the trenches, during which Lord Clifford Chatterley becomes paralysed from the waist down. Others die in that opening skirmish, a fact of which Clifford remains cognisant as he spends the rest of the play confined to a wheelchair.

Lias’s war trench setting, which is a permanent fixture, is somehow perfect as an all-seeing eye over the claustrophobic situations the characters find themselves in as the action moves to England and the Chatterley stately home and estates. Dead soldiers add their comments and this doesn’t seem out of place either.

Trapped in a sexless marriage because of her husband’s loss of all genital related activity, Clifford’s young wife Constance resents being destined to be a carer forever and seeks fulfilment elsewhere. After a few false starts, she settles on a passionate affair with the gamekeeper Oliver Mellors. The cold cemetery-like trench now becomes his hut – a place of warmth where passions are unleashed.

Inevitably, ardent secrets eventually become tainted lies or spoken truths. The final scenes where Clifford falls from his chair and crawls across the floor a broken man and Constance leaves in search of a new destiny is jaw-dropping stuff. We feel sorry for them both – Clifford may have lost the ability to perform sexually but not the desire and Constance does not deserve to forever be the ‘scarlet lady’.

Rupert Hill is perfect as Mellors, the sultry sexual gamekeeper who is a respectful as much as masterful lover – Phoebe Marshall simply oozes sexuality when she unleashes it from its cage as Constance and Mark Hawkins takes us through his personal journey of pain and frustration in a very joined-up performance.

Bethan Nash, Tom Richardson, Daniel Goode and Guy Dennys add depth to the company in the many other parts they play. In fact everyone from creative to cast work together impeccably to produce this Lady Chatterley for today’s generation – it may not shock anymore but rather lets passion engulf us in a joyful experience.