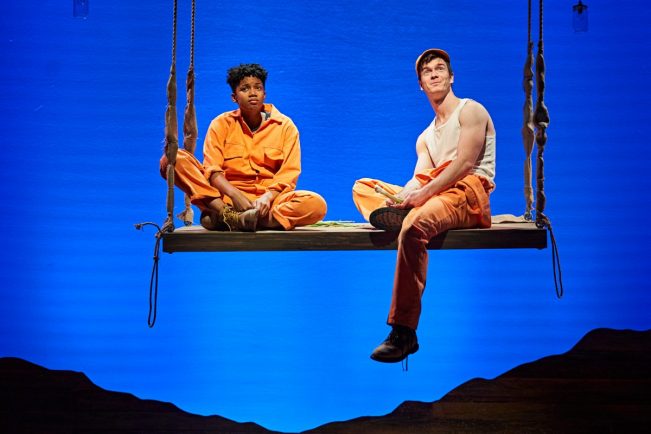 He is best known for the ‘Wayside School’ series and the award-winning novel ‘Holes’.

In 2003, Holes was made into a movie by Disney with Sachar writing the screenplay himself. It’s probably the movie that is best known and this stage version (again by Sachar) is destined to bring in whole new audiences to the theatre – if the first night of the UK tour is anything to go by.

I came new to the party but Bobby – the young man I took along for an expert opinion – was familiar with the story of life on an American prison farm. Here, a wrongly incarcerated boy called Stanley (a charismatic and engaging outing from James Backway), has to dig the same sized hole every day whilst a tyrannical warden looks on.

It’s a humdinger of a tale and director Adam Penford has used every form of theatre from the musical to the physical by way of the practical to tell it. The young ‘orange is the new cool’ clothed cons shovel spade loads of sand from one giant hole to another whilst engaging in banter, barracking and battles under the blistering sun at this, their sad ‘university of life’.

The Warden, a cracking performance by Rhona Croker, is definitely hiding something and has her charges digging holes on the hunt more for buried treasure than rebuilding broken characters.

All of the company were well-cast, many doing a multiplicity of roles. They operated beautifully as a team as they interjected ‘life in the camp’ with vignettes about ancient outlaws, curses and pioneers.

My favourite con was Leona Allen as Zero, who was lump-in-the-throat appealing in vulnerability as an uneducated street kid with aspirations – Bobby’s was definitely ‘Armpit’ played by Henry Mettle with his stand-up comic appeal looming as large as his physique.

Simon Kenny is a designer with a massive pedigree and ‘Holes’ is one more triumph to add to his list. Must have been quite a challenge to bring a dried-out lake full of holes to the stage – he’s made it look simple and that’s the sign of creative genius.

The other stars of the show are the critters and the critter director in the form of master puppeteer Mathew Forbes.

His rattlesnakes and yellow spotted lizards are indeed the stuff of nightmares.

Strangely on refection I think Holes is a morality play along the same lines as Charles Kingsley’s Water Babies – ‘do as you would be done by’ being the common message.

Nottingham Playhouse created this production originally and this 2020  tour is a co-production by the Children’s Theatre Partnership and the Royal and Derngate Northampton.

The show runs until Saturday, March 7.