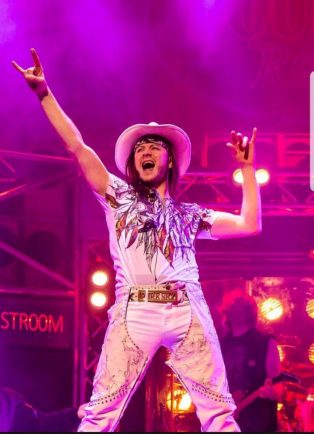 SET IN the 1980s and featuring classics of the period ‘Rock of Ages’ is full of nipple tweaking, bottom spanking and knickers off naughtiness. Best leave your inhibitions at home and join in the fun.

Rhiannon Chesterman makes a ‘wholesome as Doris Day’ job of Sherrie the rock chick wannabe.  She’s in LA to make her dreams come true where she meets another wannabe rocker Drew, played by Luke Walsh.

Romance blossoms amidst a belting jukebox background including songs from Def Leopard. Sherrie and Drew both get jobs working at a legendary Rock club ‘The Bourbon’. As it happens this is hosting a massive farewell gig for superstar Stacey Jaxx, played.by Strictly Come Dancing Star, Kevin Clifton. Clifton makes for a very tame Jaxx – he’s not in it much and he may be mild on the acting but he he can certainly belt out the tunes. I particularly liked ‘I wanna know what Love it’

Jaxx, in turn, is pursued by Rolling Stone reporter Constance Sack – a likeable performance from Erin Bell. Enter German tycoon and generals baddy Hertz together with his son Franz, nice cameos from Vas Constanti and Andrew Carthy. Hertz is trying to shut down the club, to the horror of its owner Dennis Dupree, a fabulous performance from Ross Dawes.

Lonny, Dupree’s goofy assistant and our narrator through this rock ‘n’ roll fairy-tale is played lovingly by a spot-on Joe Gash.

For me, Jenny Fitzpatrick as Justice steals the show as Venus Gentleman’s club owner. Her diva soul vocals had everyone in the auditorium on their feet every time she belted out a tune.

The premise of the misogynistic sex, drugs and rock ‘n’ roll plot of this show, which has been around for many years, somehow remains acceptable despite its overtones. Good-natured banter somehow tempers sexism.  Whacky plot and a wonderful cast and great music make this a fun night out, not just for rockers – something here for everyone young at heart.