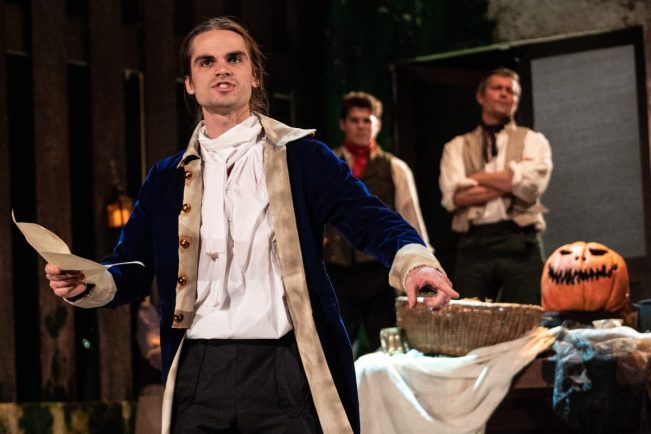 ‘OH WHAT a tangled web we weave when first we practise to deceive’ as the saying goes and this touring production of ‘The Legend of Sleepy Hollow’ is certainly tangled.

I came out not only deceived but also baffled and confused.

There can be no denying that the ‘Tilted Wig’ company give it their all – indeed this team of six consummate professionals spend nigh on two-and-a-half hours dancing, chanting, engaging in much physical theatre as well as multiple role-playing and scene-shifting. Lewis Cope is Brom Van Brunt and Tommy Sim’aan is Joost de Groot. They should make a stellar team – so what is wrong?

The flaw is in the writing, compounded by the direction. The actors have been given individual complex tales to tell which lack relevance to the main story. They do this in strange and inconsistent accents.

Philip Meeks has taken the simple straightforward classic short horror story by Washington Irving and turned it into something between a cerebral essay on urban mythology and sort of gothic Shakespeare that simply doesn’t gel.

Director Jake Smith comes with a strong pedigree of working with some of our finest theatres.

He should have asked the writer for cuts and changes but instead seems to have added to the confusion by relentlessly leading us up blind alleys when all we are crying out for is a simple plot.

On the positive side, Amy Watts has produced a highly workable and atmospheric set.

In addition there are some clever set pieces from illusions director Filipe J Carvalho and good fight direction from Jonathan Holby.

The programme in the form of an old horror comic is very clever and noteworthy.

A ghost story is meant to be scary and I’m afraid this isn’t.

For me the web was far too tangled – and finally – what on earth was that stupid parrot all about?

The Legend of Sleepy Hollow runs until Saturday, November 6, at Malvern Theatres before continuing its tour.