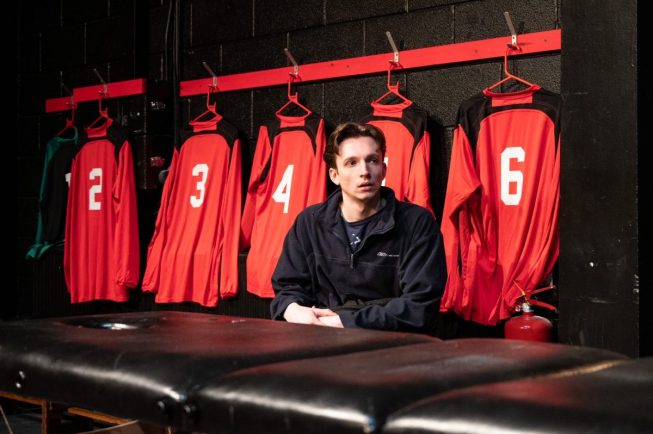 YOU CAN be forgiven for thinking ‘The Red Lion’ is going to be a play about pub life – I did from the title but it is in fact a simply bitingly fearsome piece about club land – football club land that is and we’re not talking anti-vax pampered Premier League footballers with seven figure managers who need interpreters to talk to their players.

No – the Red Lion here is the logol of a nameless, struggling, semi-professional non-league football club. One where like the big cheeses of the beautiful game, passion may be all consuming but corruption hisses on its underbelly. When boiling point is reached it’s time to ring the changes.

Like Marber’s masterpiece ‘Closer’, The Red Lion requires a ‘big ask’ of a small cast to excel individually and feed off each other collectively in order to do justice to his helter-skelter storyline with its beautifully crafted text and subtext.

It also needs a director with a meticulous eye for detail who knows how to make his sheriffs tin star shine when leading his posse into the fray and a designer who can provide a believable canvas.

The cast of three makes for a herculean combo who almost transcend from acting to believing. Even though we may not share their passion, we share their journey and feel their pain.

As we enter the club dressing room, or rather auditorium, we meet Brendan Stanley as Yates the club’s kit man who is meticulously ironing the team shirts.

That’s not to take anything away from the other two. Yates is joined by fresh-out-of-the-shower, seedy low level with big aspirations club manager Kidd – another powerful performance from Mark Thompson.

Francis Quinn completes the trio as Tom, the boy wonder who proclaims himself a fervent Christian. Quinn broods and bubbles beautifully in a menacing and haunting portrayal.

There are so many memorable moments in this play it’s difficult to single them out but for me there is a point in act two where the three protagonists strike poses in a pause from dialogue that I found breathtaking. They showed and shared their thoughts by body language – not words. The late great movement coach from Birmingham Acting Conservatoire David Vann taught me that all characterisation comes from a single point on the body. Once you’ve found it, you’ve found your character. It is apparent that Braidwood knows this too and has employed it brilliantly with his company.

There is much to admire technically too – from the powerful musical underscore, through the clever use of the space to effective, spot-on-cue lighting from James Booth.

This play deserves full houses! Big name productions are struggling for audiences as we come out of this ghastly lockdown and my fear is that ‘The Red Lion’ will pass with a whimper rather than a roar. I implore all theatre lovers not to let this happen.

Theatre isn’t like a film it’s a magical experience that happens but once and you remember the good stuff for a lifetime. This isn’t just good, it’s outstanding!

The Red Lion runs at the Crescent until Saturday, January 29.