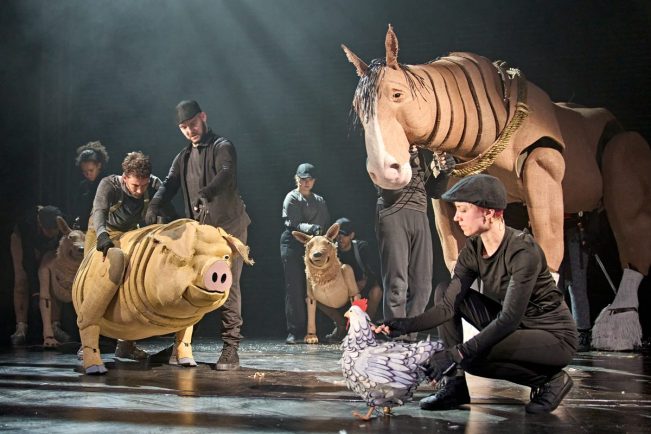 THE WORLD premiere of a re-imagining of George Orwell’s Animal Farm – a joint production between the Birmingham REP and the Children’s Theatre Partnership – opened last night to a packed auditorium.

It is indeed an extraordinary and powerful piece of theatre – one which narrows the line between puppetry and flesh-and-bone actors to nigh infinity – the term ‘Warhorse on Steroids’ comes to mind.

From the chickens to the giant plough horse these ‘created by master crafters’ and ‘operated by masterful puppeteers’ are real – right from the dramatic opening chords heralding the animal assembly to the ‘Pigs on two legs’ final conversion.

This is also a far more demonic outing than the original 1945 novel. Here, the farmer and his chums have Range Rovers and guns and there are gory scenes of torture, mutilation and death. There’s even a screen heralding the body count with animal names, breed and means of death.

Orwell’s message is the same though – that despite revolution to bring about a classless society, equality is a myth that never happens.

Someone will always want to be more equal than the others.

It is directed and adapted by the multi award-winning Robert Icke. Icke’s other Orwell adaption of 1984 was a sensation on both Broadway and in the West End.

The production team also consists of some of UK theatre’s most talented creatives, including four-time Olivier Award-winning designer Bunny Christie and puppetry by Toby Olié – the genius who gave us the original Warhorse.

This ‘Animal Farm’ is a dynamic and contemporary take on a timeless story which I’d say will appeal to audiences aged over 12 as  it goes from the REP onto  a national tour and then beyond.

It is also another huge enticement to get audiences back into our premier, city-centre producing theatre – where – oh joy – the new bar is open!

Animal Farm runs at the Birmingham Rep until next Saturday, February 5.