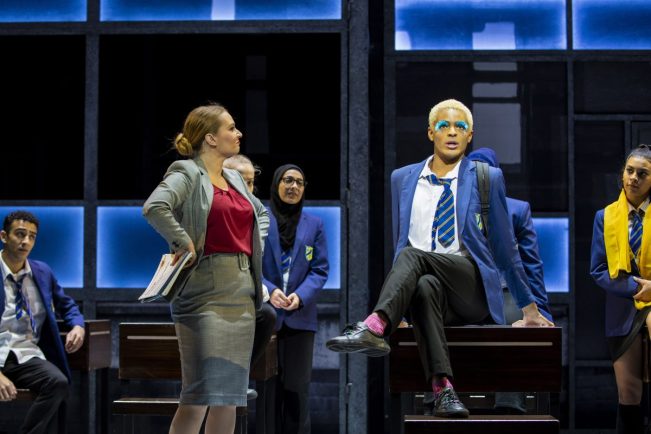 THIS was a show I had to see following Tristan Harris’s rave review of the Birmingham Alex’s leg of the tour.

Luckily I was able to catch up with it at the Grand Wolverhampton where it is playing to full houses every night.

Before we get to my review of the show I must give a special mention to the wonderful new proscenium curtain at the Grand. It is majestic both in richness of colour and elegance of style; fitting in perfectly with the ornate splendor of one of the finest auditoriums in the country.

‘Everybody’s Talking About Jamie’ is refreshing in concept and like ‘Six’ it’s a debut show for new creative folk on the block – Tom Macrae wrote the book and lyrics partnering with Dan Gillespie Sells who scribed the score and Jonathan Butterell who did some all round co-writing and was the original director.

The show touches on the many challenges that face parents and school leavers today – what career path to take; dreams v reality, colour, class, religion and sexuality with a capital S. All intricate back-stories and comments wrapped up in the big picture of Jamie’s dream of being a drag artist.

The storyline has you laughing and crying in equal measures. It is clever, witty and oh so poignant.

It contains some cracking songs across a broad church of styles; stand outs for me were ‘The Wall In My Head’ sung by Jamie, ‘He’s My Boy’ from Jamie’s mum Margaret and of course the title song which includes pretty well the whole company at various stages.

The set where school desks become catwalks and the back wall becomes a cacophony of imagery is both practical and brilliant. The ‘wall’ takes us into various locations and opens up ingeniously, spilling rooms including a practical kitchen and a toilet block, onto the stage. Best of all, the back wall has a penthouse at its apex, which lights up every so often revealing what I can only describe as an Andy Warhol painting of a movie film strip; In each frame a band member sits silhouetted.

Matt Ryan directs a tight-as-a-drum company who feed off each other and us the audience.

Amongst the excellence standing out for me is Lara Denning as head teacher Miss Hedge, Amy Ellen Richardson as a ‘Mum for the times’, Margaret, Shobna Gulati as Margaret’s buddy, Ray and Sharan Phull as Jamie’s school chum Pritti Pasha.

Shane Richie proves once again he is not a one-trick East End pony. I was very impressed with his amoral Archie Rice in ‘The Entertainer’ and here he is playing the direct opposite as the aging, warm-hearted, drag artist Hugo.

It’s unmissable theatre, folks – try and get a return at the Grand if you can or travel and catch it on another leg of this national tour,