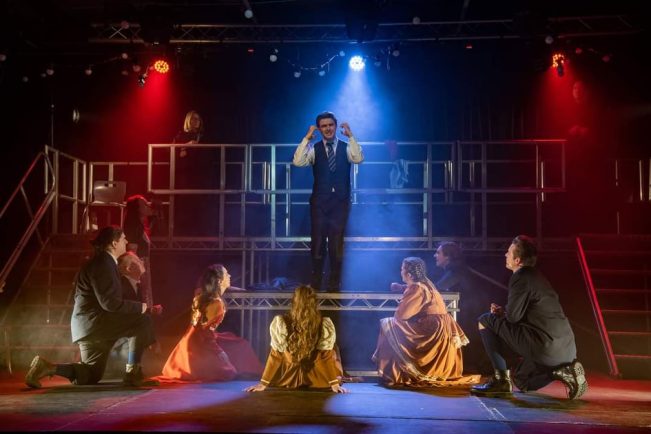 IT IS always good to welcome new musical theatre companies to the Midlands arena, especially one that seeks to break the mould of just performing standard crowd pleasers.

Enter OBSIDIAN, the child born during Covid from the combined theatrical and entrepreneurial talents of actor/director Robert Bateman and musical director Phil Ypres-Smith.

Bateman and Ypres-Smith’s plan is to air edgy and lesser-known musicals with a message and to link that into raising awareness and funds for charities that support themes associated with the shows.

That is all well and good if what goes on stage lives up to the mantra and is not simply a fund-raiser – however worthy the cause. Any fears of that were allayed when the opening heralded a moment of breath-taking originality, to which I shall return.

Obsidian’s first choice of show is ‘Spring Awakening,’ the German classic ‘coming of age’ musical by Steven Sater and Duncan Sheik based on the original 1891 play by Frank Wedekind,  which opened last night at the Dovehouse Theatre,

The storyline covers sexual discovery in its many guises – its beauty and its consequences. There is bullying, self-harm, abortion and suicide all set to a song book that jigs around from punk rock to classical aria.

In truth it’s never going to be laugh-a-minute-a-stuff – after all, German’s aren’t exactly renowned for their sense of humour and as for music – think Wagner but this is a show with a voice that cries out to be heard!

The opening I referred to is an imaginative creation by a hugely talented lighting designer Dermot Finnegan.

Wendla Bergman, the young girl whose short story is about to unfold is shrouded in an ethereal blue haze – a silent vignette in itself. The first of many memorable set lighting pieces which added titanic layers to the bare, utilitarian platform set.

Wendla is played by the extremely capable Lucy Covell, who I note has also appeared with the excellent Stratford based ‘Tread the Boards’ company and is in her final year at the Royal Birmingham Conservatoire of Acting. Covell took her character on a journey that was both well signposted and endearing.

A young man burdened with problems is Moritz Stiefel –  bullied by his father, his teacher and his fellow students as the class scapegoat. His is a sad life with just one redeeming opportunity, which eludes him.

Moritz is played to perfection by Oli Keeling who draws us in like a waif from a Dicken’s novel.

Robert Bateman has set himself a daunting task by directing and choreographing the show in addition to playing a leading character – a trilogy of roles with danger lurking at every turn. To his credit, like Daisy in the show of the same name ‘Bateman pulls it off!’.

He can put a tick by every box. His Melchior Gabor, is an empathetic and compelling outing, his direction pacey and his choreography imaginative – so Bravo Mr B – your pioneering has paid off.

Co-Obsidian pioneer Phil Ypres-Smith has put together a band of excellence. To watch the two rows of musicians in vertical columns either side of the stage was quite unique.

One headed by Ypres-Smith MDing from behind his keyboards and the other by his co-conductor Jonathan Clarke on a harmonium. Guitars and drums stage right – strings and things stage left.

Ypres-Smith has directed passionate solos and some excellent choral work from the company that were always in keeping with the story; never once straying over into concert – a sure sign of director and musical director togetherness.

The entire cast deserves credit; they work in synergy as a well-drilled team exuding vigor. Especially noteworthy are Bethany Waller-Scott as Martha Bessell, Richard Bateman as Georg Zirschnitz and Tony Faughnan as the adult male.

For those of you who like me were wondering about the company name – OBSIDIAN is a black volcanic natural glass, which is supposedly extremely lucky – often used for making arrowheads. Well those arrows certainly struck home – this is an excellent night’s theatre that I highly recommend.