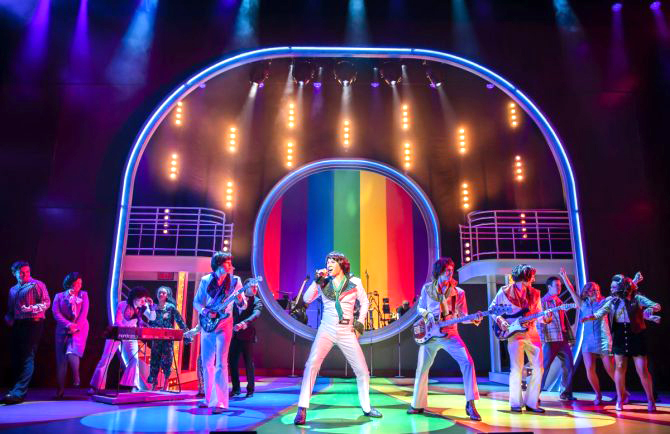 IT IS delightful when as a reviewer you go to see a show with low expectations and come out with stars in your eyes.

I was expecting a jukebox musical featuring The Osmonds catalogue and what I got was an honest-to-God musical biopic with hidden depths and more twists and turns than the big dipper at Blackpool pleasure beach. 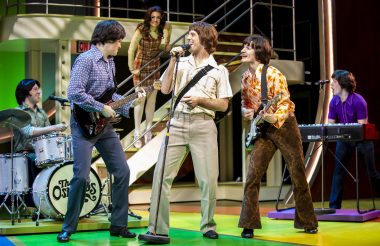 The story is written by the drummer Jay Osmond – quite fittingly as drummers always have a unique rear view take on matters. Shaun Kerrison and Julian Bigg, the shows director and musical arranger, helped Jay turn his story into an outstanding book.

The Osmonds are historically not known for a ‘sex, drugs and rock ‘n’ roll’ lifestyle associated with the genre, but more a squeaky clean Mormon family of five brothers and one sister. However, the fact they stick together through thick and thin with core values of Family, Faith and Dedication come across as something to admire not sneer at.

They did in fact influence a whole generation of girls who had to follow on the high heels of the permissive 60s. They told them through words and deeds that it is not compulsory to be a swinger and just as cool to be faithful as it was to bedhop. This is done beautifully via fan letters to Jay from Wendy in Manchester – their number one fan -a joyous little cameo from Katy Hards.

The cast is quite huge by modern standards, with two sets of Osmonds – the young (of which there has to be treble casting to comply with the laws) and the adult – plus a large ensemble of multi-role players. That makes for a massive and fabulous wardrobe of seventies flares and glam rock frocks– plus a liberal sprinkling of Elvis rhinestone. Take a bow Lucy Osborne costume and set designer.

Osborne’s set consists of five psychedelic stripes from fanning out across the floor from rear to front of the proscenium. Each of these is a mini stage for an Osmond brother wearing something that matches the colour of his stripe. Cleverly the only time they are not dancing in their own stripes is when there is disharmony in the air.

There is a huge set piece resembling a suspension bridge which swings in and out creating spaces of interest  and a raised porthole at the back of the stage through which the band can occasionally be spotted.

The show is narrated naturally enough by Jay – a wholeheartedly honest performance from Alex Lodge -the other Osmond brothers are Donny (Joseph Peacock),  Merrill (Ryan Anderson), Alan (Jamie Chatterton) and Wayne (Danny Nattrass) – all fine outings both as individuals and as team Osmond.

Charlie Allan plays the military-minded dad who is more ‘Sir-yes Sir’ than  ‘Give daddy a hug’ and Nicola Bryan plays his wife and sidekick Olive with warmth and gusto.

Completing the Osmond line-up and putting in quite a remarkable performance is Georgia Lennon as Marie – she’s half girl next door, half superstar. 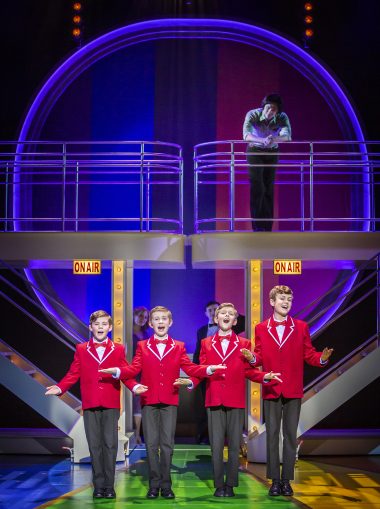 The Osmonds started out as a tiny-tot barber shop quartet on the Andy Williams Show and went onto become the biggest boy band in the world before Donny became a solo sensation. Following that him and Marie became TV hosts of their own show.

After selling over a 100million records their downfall came through over production – the fans didn’t want Mary Poppins routines – they wanted rock ‘n’ roll. It was a squeaky clean squeeze too far. They lost everything and went on a two-year old style Osmond’s music world tour to earn enough money to pay their debts.

After the tour the Osmond’s disbanded and pursued individual careers and lives but they got back together for one final concert 20 years later. That concert is the final section of this wonderful show where we are all invited to the party.

It cannot be denied that the Osmonds created a legacy and for me two things are amazing. Firstly that this musical hasn’t been made before and secondly that it’s been made in England – Leicester to be precise; at the Curve Theatre where it premiered a few weeks ago.

As it happens there was second show going on last night at the Grand too – that was starring the 95 per cent female audience.

They sang along with everything from ‘Crazy Horses’ to ‘Long Haired Lover from Liverpool’ – knowing every word, linking hands and waving arms in the air like they did back in the 70’s and 80’s.

To cap it all, a mighty buzz ran round the theatre at the start of Act Two – Jay Osmond was in the house everybody! He walked through the circle and took up residence in the stage left box. His fans paid homage and he waved back. What sorcery is this?

‘The Osmonds’ musical is set for a long tour and then the West End and undoubtedly Broadway. You don’t have to be an aging fan to enjoy it – go and wallow in its’ bliss – it’ll put a smile on your face and joy in your heart – something we all need in these terrible times.