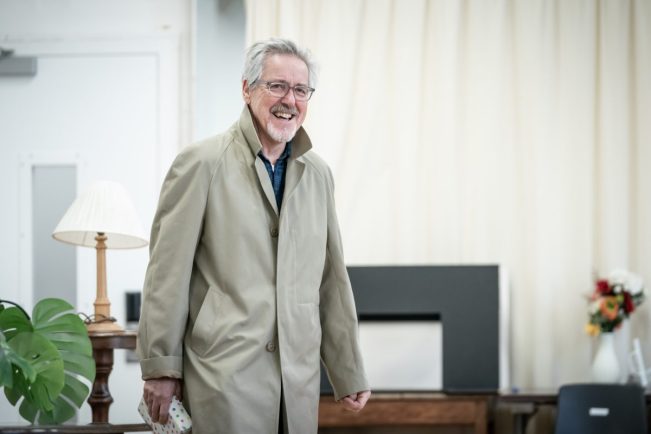 THIS adaptation of ‘An Hour and a Half Late by French playwright Gerald Sibleyras was first staged in the UK back in 2006 and starred the late comedian Mel Smith.

Here we are in 2022 and this time it stars Mel Smith’s partner the iconic Griff Rhys Jones. This surely is no accident but perhaps a tribute by Rhys Jones to his late chum as I cannot really see any other compelling reason to revive it.

It’s a pleasant enough piece, directed by Belinda Lang and beautifully acted by Rhys Jones as Peter, (a London tax consultant about to retire) and Janie Dee as his ‘frustrated on many levels’, wife Laura. However, it is dated and not in a cosy ‘Noel Coward’ kind of way but in a ‘people don’t really live like this any more’ pastiche.

Certainly one of the centrepiece speeches concerns Peter’s desire to indulge in a restaurant sweet trolley – the sort that has all kinds of wobbly, gluttonous goodies squeezed elbow to elbow on its mobile tiers. I concur, but it’s been many years since I saw one of those – I think the department of food and hygiene condemned them to the ‘museum of lost indulgencies’ many years ago. Effectively this also took the plot away from modern day living.

Peter and Laura are due out to dinner with Peter’s business partner. As the curtain rises we meet him sitting downstage with a smile born of years of non-confrontational marital manners and a twitching foot where all his irritation is focused.

Laura enters and moves speedily around the sumptuously furnished large lounge and areas off – seemingly without purpose. When she finally speaks it is to tell Peter she isn’t going.

This is the cue to start a bickering session about all that is wrong with their marriage – from sex to political complacency. She has, she despairs, swapped her political feistiness for white middle class gin and arty-farty-ness. Plus – horror of horrors – she didn’t have the affair she claimed to have after all.

This is followed shortly after by a liberating trashing scene where the couple indulge in mild rock and roll antics of smashing plates, emptying waste bins and scattering – scatter cushions.

Everything moves up a gear, a truce is reached and they finally go off to dinner – albeit an hour and a half late.

We are left in the glow of two excellent performances from Rhys Jones and Dee who have given of their best. It’s worth going to see for that reason but would love to have seen them do ‘Blythe Spirit’ instead.

An Hour and a Half Late runs until Saturday, March 19. Click here for times, tickets and more information.